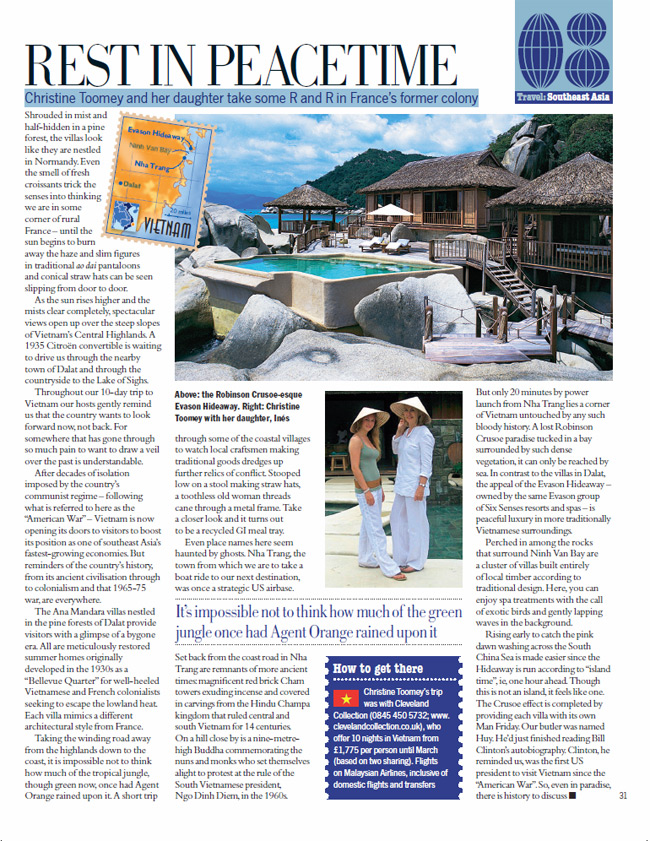 Shrouded in mist and half-hidden in a pine forest, the villas look like they are nestled in Normandy. Even the smell of fresh croissants trick the senses into thinking we are in some corner of rural France – until the sun begins to burn away the haze and slim figures in traditional ao dai pantaloons and conical straw hats can be seen slipping from door to door.

As the sun rises higher and the mists clear completely, spectacular views open up over the steep slopes of Vietnam’s Central Highlands. A 1935 Citroen convertible is waiting to drive us through the nearby town of Dalat and through the countryside to the Lake of Sighs.

Throughout our 10-day trip to Vietnam our hosts gently remind us that the country wants to look forward now, not back. For somewhere that has gone through so much pain to want to draw a veil over the past is understandable.

After decades of isolation imposed by the country’s communist regime – following what is referred to here as the “American War” – Vietnam is now opening its doors to visitors to boost its position as one of southeast Asia’s fastest-growing economies. But reminders of the country’s history, from its ancient civilisation through to colonialism and that 1965-75 war, are everywhere.

The Ana Mandara villas nestled in the pine forests of Dalat provide visitors with a glimpse of a bygone era. All are meticulously restored summer homes originally developed in the 1930s as a “Bellevue Quarter” for well-heeled Vietnamese and French colonialists seeking to escape the lowland heat. Each villa mimics a different architectural style from France.

Taking the winding road away from the highlands down to the coast, it is impossible not to think how much of the tropical jungle, though green now, once had Agent Orange rained upon it. A short trip through some of the coastal villages to watch local craftsmen making traditional goods dredges up further relics of conflict. Stooped low on a stool making straw hats, a toothless old woman threads cane through a metal frame. Take a closer look and it turns out to be a recycled GI meal tray.

Even place names here seem haunted by ghosts. Nha Trang, the town from which we are to take a boat ride to our next destination, was once a strategic US airbase.

Set back from the coast road in Nha Trang are remnants of more ancient times: magnificent red brick Cham towers exuding incense and covered in carvings from the Hindu Champa kingdom that ruled central and south Vietnam for 14 centuries.

On a hill close by is a nine-metre-high Buddha commemorating the nuns and monks who set themselves alight to protest at the rule of the South Vietnamese president, Ngo Dinh Diem, in the 1960s.

But only 20 minutes by power launch from Nha Trang lies a corner of Vietnam untouched by any such bloody history. A lost Robinson Crusoe paradise tucked in a bay surrounded by such dense vegetation, it can only be reached by sea. In contrast to the villas in Dalat, the appeal of the Evason Hideaway – owned by the same Evason group of Six Senses resorts and spas – is peaceful luxury in more traditionally Vietnamese surroundings.

Perched in among the rocks that surround Ninh Van Bay are a cluster of villas built entirely of local timber according to traditional design. Here, you can enjoy spa treatments with the call of exotic birds and gently lapping waves in the background.

Rising early to catch the pink dawn washing across the South China Sea is made easier since the Hideaway is run according to “island time”, ie, one hour ahead. Though this is not an island, it feels like one. The Crusoe effect is completed by providing each villa with its own Man Friday. Our butler was named Huy. He’d just finished reading Bill Clinton’s autobiography. Clinton, he reminded us, was the first US president to visit Vietnam since the “American War”. So, even in paradise, there is history to discuss.