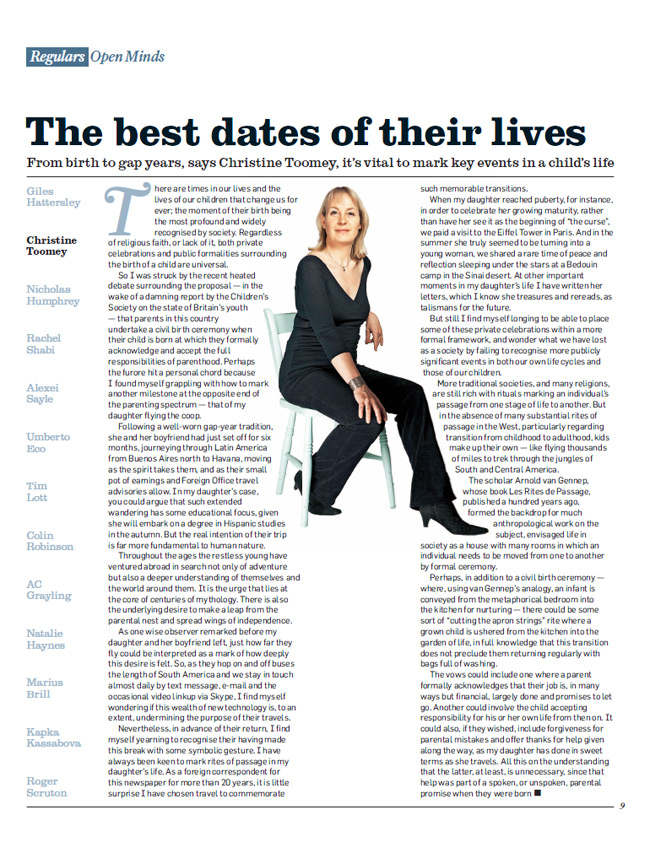 There are times in our lives and the lives of our children that change us for ever; the moment of their birth being the most profound and widely recognised by society. Regardless of religious faith, or lack of it, both private celebrations and public formalities surrounding the birth of a child are universal.

So I was struck by the recent heated debate surrounding the proposal — in the wake of a damning report by the Children’s Society on the state of Britain’s youth — that parents in this country undertake a civil birth ceremony when their child is born at which they formally acknowledge and accept the full responsibilities of parenthood. Perhaps the furore hit a personal chord because I found myself grappling with how to mark another milestone at the opposite end of the parenting spectrum — that of my daughter flying the coop.

Following a well-worn gap-year tradition, she and her boyfriend had just set off for six months, journeying through Latin America from Buenos Aires north to Havana, moving as the spirit takes them, and as their small pot of earnings and Foreign Office travel advisories allow. In my daughter’s case, you could argue that such extended wandering has some educational focus, given she will embark on a degree in Hispanic studies in the autumn. But the real intention of their trip is far more fundamental to human nature.

Throughout the ages the restless young have ventured abroad in search not only of adventure but also a deeper understanding of themselves and the world around them. It is the urge that lies at the core of centuries of mythology. There is also the underlying desire to make a leap from the parental nest and spread wings of independence.

As one wise observer remarked before my daughter and her boyfriend left, just how far they fly could be interpreted as a mark of how deeply this desire is felt. So, as they hop on and off buses the length of South America and we stay in touch almost daily by text message, e-mail and the occasional video linkup via Skype, I find myself wondering if this wealth of new technology is, to an extent, undermining the purpose of their travels.

Nevertheless, in advance of their return, I find myself yearning to recognise their having made this break with some symbolic gesture. I have always been keen to mark rites of passage in my daughter’s life. As a foreign correspondent for this newspaper for more than 20 years, it is little surprise I have chosen travel to commemorate such memorable transitions.

When my daughter reached puberty, for instance, in order to celebrate her growing maturity, rather than have her see it as the beginning of “the curse”, we paid a visit to the Eiffel Tower in Paris. And in the summer she truly seemed to be turning into a young woman, we shared a rare time of peace and reflection sleeping under the stars at a Bedouin camp in the Sinai desert. At other important moments in my daughter’s life I have written her letters, which I know she treasures and rereads, as talismans for the future.

But still I find myself longing to be able to place some of these private celebrations within a more formal framework, and wonder what we have lost as a society by failing to recognise more publicly significant events in both our own life cycles and those of our children.

More traditional societies, and many religions, are still rich with rituals marking an individual’s passage from one stage of life to another. But in the absence of many substantial rites of passage in the West, particularly regarding transition from childhood to adulthood, kids make up their own — like flying thousands of miles to trek through the jungles of South and Central America.

The scholar Arnold van Gennep, whose book Les Rites de Passage, published a hundred years ago, formed the backdrop for much anthropological work on the subject, envisaged life in society as a house with many rooms in which an individual needs to be moved from one to another by formal ceremony.

Perhaps, in addition to a civil birth ceremony — where, using van Gennep’s analogy, an infant is conveyed from the metaphorical bedroom into the kitchen for nurturing — there could be some sort of “cutting the apron strings” rite where a grown child is ushered from the kitchen into the garden of life, in full knowledge that this transition does not preclude them returning regularly with bags full of washing.

The vows could include one where a parent formally acknowledges that their job is, in many ways but financial, largely done and promises to let go. Another could involve the child accepting responsibility for his or her own life from then on. It could also, if they wished, include forgiveness for parental mistakes and offer thanks for help given along the way, as my daughter has done in sweet terms as she travels. All this on the understanding that the latter, at least, is unnecessary, since that help was part of a spoken, or unspoken, parental promise when they were born.