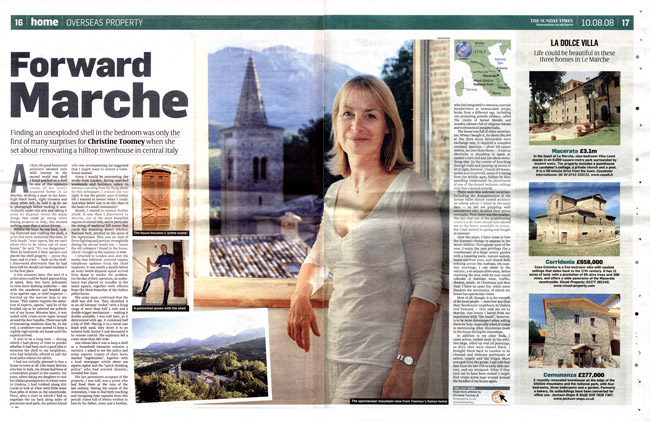 At first, the good-humoured poliziotto showed only mild interest in the second world war shell I found perched on a shelf in one of the upstairs rooms of my newly acquired home in Le Marche. Striking a pose in his knee-high black boots, tight trousers and shiny white belt, he held it up for me to photograph before tucking it nonchalantly under one arm and taking it away for disposal. Given the many things that could go wrong when buying property in Italy, this seemed nothing more than a minor hiccup.

Within the hour, he was back, looking flustered and cradling the shell, a great deal more cautiously this time, in both hands. “Scusi signora, but we can’t allow this to be taken out of your house,” he said. “It’s too dangerous.” Then he hotfooted it back upstairs and placed the shell gingerly – prone this time, and in a box – back on the shelf. I discovered afterwards that he had been told he should not have touched it in the first place.

A few minutes later, the wail of a police siren could be heard approaching at speed, then two more policemen in even more dashing uniforms – one with the epaulettes and braided cap of an ispettore capo, or chief inspector – hurried up the narrow lane to my house. “This matter requires the attention of experts, signora,” said he of the braided cap as he ushered me politely out of my house. Minutes later, it was sealed with crime-scene tapes wound around the door handles. There was talk of evacuating residents close by. In the end, a carabiniere was posted to keep a nightly vigil outside my house until the experts arrived.

It was to be a long wait – during which I had plenty of time to ponder whether it had been such a good idea to mention the shell to my neighbour, who had helpfully offered to call the local police station for advice.

I had not initially planned to buy a house in town at all. Like many Britons who buy in Italy, my dream had been of a renovation project in the country. For years, when taking my daughter to visit her Italian grandparents in a busy town in Umbria, I had trekked along dirt tracks to look at what were little more than piles of stones in the countryside. Then, after a visit in which I had to negotiate the car back along miles of precarious mud path, the patient friend who was accompanying me suggested that I might want to restore a townhouse instead.

Since I would be overseeing the works from London, during snatched weekends and holidays taken in between reporting from far-flung places for this newspaper, I realised she was right. It was the gentler pace of Italian life I wanted to savour when I could. And what better way to do this than in the heart of a small community?

Slowly, I started to venture further afield. It was then I discovered Le Marche, one of the most beautiful regions of central Italy, and in particular the string of medieval hill towns that circle the stunning Monti Sibillini National Park, perched on the spine of the Apennines. This was an area of fierce fighting and partisan strongholds during the second world war – hence the old ordnance I found in the house, which I bought in the summer of 2004.

I returned to London and, over the weeks that followed, received regular telephone updates from the chief inspector. It was nearly a month before an army bomb-disposal squad arrived from Rome to resolve the problem. On the day of their operation, an ambulance was placed on standby in the main square, together with officers from the three branches of the Italian police forces.

The army team confirmed that the shell was still live. They identified it as an old German “rocket” with a firing range of more than half a mile and a double-trigger mechanism – making it doubly unstable, I was told later, as it deteriorated with age. It contained half a kilo of TNT. Placing it in a metal case lined with sand, they drove it to an isolated field, buried it and detonated it by remote control. The explosion left a crater more than 20ft wide.

Just whose idea it was to keep a shell as a household memento remains a mystery. I asked to see the police and army reports. Copies of their faxes marked “urgentissimo”, together with a local newspaper article about una signora inglese and the “quick-thinking police” who had averted disaster, revealed few clues.

The last permanent occupant of the property, I was told, was a priest who had lived there at the turn of the last century. During the course of the restoration, I was to find both touching and intriguing time capsules from this period: crates full of letters written to him by his father, sister and a brother, who had emigrated to America; journals handwritten in immaculate script; books from a different age, including one promoting priestly celibacy, called The Limits of Sexual Morals; and wooden cabinets full of religious statues and ecclesiastical paraphernalia.

The house was full of other surprises, too. When I bought it, for about £80,000 at the then more favourable euro exchange rate, it required a complete overhaul. Spacious – about 250 square metres, set over three floors – it had no electricity or plumbing to speak of, needed a new roof and just about everything else. In the course of knocking through walls and opening up rooms to let in light, however, I found old beams, arches and stonework, some of it dating from the Middle Ages, hidden by false panelling. Underneath the plasterwork of one of the domed bedroom ceilings were fine coloured stencils.

There were less welcome surprises, including the disappearance of the former ballet dancer turned architect on whose advice I relied in the early days – he left me grappling with contractors who doubled their prices overnight. Then there was the weather. The fact that one of the neighbouring towns is a ski resort should have alerted me to the heavy snowfalls in winter, but I had viewed in spring and bought in summer.

Over the years, I have come to love the dramatic change in seasons in the Monti Sibillini. Throughout most of the year, I enjoy the rare privilege (for a townhouse) of a large sunny garden with a towering palm, mature walnut, laurel and fruit trees, and church bells echoing across the rooftops. On summer mornings, I can swim in the Adriatic, a 45-minute drive away, before exploring the area, with its year-round calendar of festivals: wine, truffles, theatre, music. At Christmas and New Year, I have an open fire, while snow blankets the mountains, of which my house has spectacular views.

Most of all, though, it is the warmth of the local people – more low-key than their flamboyant neighbours in Umbria and Tuscany – that sold me on Le Marche. One lesson I learnt from my experience with “the bomb”, however, is to be more circumspect when asking them for help. Especially when it comes to mentioning other discoveries made in the house during its restoration.

In addition to my other finds, I came across, tucked away in the attic, two large, rolled-up oval oil paintings, so dirty they were almost black. I brought them back to London to be cleaned and delicate portrayals of saints, angels and the Virgin Mary emerged from the grime. I am told they date from the late 17th to early 18th century, and am intrigued. What if they turn out to have been stolen? I might find crime-scene tape wound around the handles of my house again.